Thick-skinned winter squashes, such as Hubbard and Butternut, are enormously tasty and healthful — a treat for the winter kitchen if ever there was one. BUT they also have a rind that could probably stop bullets. It certainly stops cooks — who settle instead for pre- packaged squash chunks. Don’t do that. They are costly, bland, mealy, and don’t have the flavor of a winter squash that’s aged nicely for a month or so within the shell after harvest.

Instead, do this: Buy a whole squash, and have on hand a good butcher knife with an 8-inch (or so) blade maybe two inches deep. With this, trim off both ends of the squash. Then cut off the bulbous end where the seeds are, and cut the neck into two or three sections. Lay each of these cut side down on a breadboard ands slice off the skin in pieces, cutting vertically down. Then cut the bulb end in half and repeat the process, wide ends down. Remove the seeds and you’re in business. 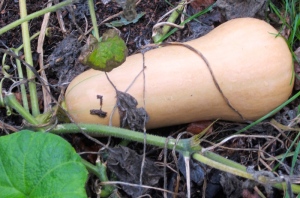 I steam winter squash in chunks, but only slightly, and never with added sweetness. Winter squash is one of those foods, like bacon, that’s easy to ruin but almost impossible to improve.

Peter V. Fossel has been gardening since he was nine, and has been an organic farmer for the last 20 years. His most recent book, “Organic Farming, Everything You Need to know” was published by Voyageur Press, Minneapolis, 2007. He’s written numerous gardening articles for Organic Gardening, Horticulture, Country Journal, Out Here, and American Profile among others. He was Gardens Manager for The Hermitage, home of President Andrew Jackson in Tennessee before returning to Cape Cod to start his newest organic venture, Swan River Farm in Dennisport, MA.
View all posts by lifegrower →
This entry was posted in Uncategorized. Bookmark the permalink.