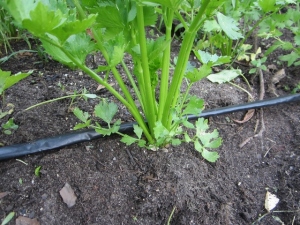 Of course — but only when it’s organic, and even better when you grow your own.

Taste is subjective, but anyone I know who’s tried both says organic celery is far more flavorful than conventional stalks. “It actually has flavor,” says one.  What’s more, conventional celery tops the “Dirty Dozen” list of fruits and vegetables containing the most pesticides (67 of them), according to the non-profit Environmental Working Group.

What’s more, if’s full of nutrients (see below) had has so few calories that you lose more calories chewing it than you do from ingesting.  I’ve grown it for years, and find it virtually immune to pests, except an occasional slug — probably because my organic soil is so nutrient-rich, and the crops so strong and healthy in turn, that pests go somewhere else for lunch.

Blight is about my only celery enemy, and that’s usually solved by using drip irrigation to keep overhead sprinkler water from splashing soil pathogens onto the leaves.  When it’s brown leaf splotches do appear, I toss them lest the problem spread.

Because of its flavor, and the fact that I’m the only one at our farmers’ market who sells it, my celery is almost a local legend. I suppose there are worse things to be famous for, and all I have to do is start it indoors, and keep it moist during dry spells.

Celery is low in Saturated Fat, and  very low in Cholesterol. It’s a good source of Riboflavin, Vitamin B6,  Pantothenic Acid, Calcium, Magnesium and Phosphorus, and a very good source of  Dietary Fiber, Vitamin A, Vitamin C, Vitamin K, Folate, Potassium and  Manganese.

Peter V. Fossel has been gardening since he was nine, and has been an organic farmer for the last 20 years. His most recent book, “Organic Farming, Everything You Need to know” was published by Voyageur Press, Minneapolis, 2007. He’s written numerous gardening articles for Organic Gardening, Horticulture, Country Journal, Out Here, and American Profile among others. He was Gardens Manager for The Hermitage, home of President Andrew Jackson in Tennessee before returning to Cape Cod to start his newest organic venture, Swan River Farm in Dennisport, MA.
View all posts by lifegrower →
This entry was posted in Uncategorized. Bookmark the permalink.