I’ve always liked raised beds, if only because they look so nice. But they also drain well; don’t get compacted; are easy to work in, being higher than surrounding paths; warm up more quickly in spring; and generally don’t need the maintenance of conventional beds.

I usually create them by simply raking soil up from around the bed, leaving a higher bed and low path. Then I mulch heavily around the sides to keep the bed from drying out. And finally I add whaterver amendments may be neeed, such as compost, greensand, bone meal, blood meal, or lime. And that’s it – ready to plant. 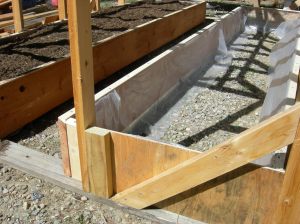 Raised beds can be formed in a multitude of other ways, and my favorites were the last ones I built inside our greenhouse in the Colorado Rockies. These were for tomatoes and peppers that wouldn’t grow outside at that altitude (9,000 ft.).  I bought four long 2-by-12s for next to nothing at a salvage yard, then fastened these into long beds on either side of a center path. The lumber was spruce, meaning it would rot before long, so to prevent this I raised each frame off the ground with pavers. Then I draped poly (meant for a dropcloth) inside the frame to overlap the ground for several inches at the bottom. I fastened it in place on top with strips of wooden lath and panhead screws, and covered that with strips of an old garden hose cut lengthwise to make for easier sitting. My butt is important to me. The hose just snapped into place and didn’t need fastening.

The poly protects the wood from soil moisture, and being covered with soil it won’t degrade in sunlight.

The same system should work with any other lumber, such as 2-by-6s or 2-by-8s.  But I still prefer my rake-up-the-soil system. Looks natural. And cheap.

Peter V. Fossel has been gardening since he was nine, and has been an organic farmer for the last 20 years. His most recent book, “Organic Farming, Everything You Need to know” was published by Voyageur Press, Minneapolis, 2007. He’s written numerous gardening articles for Organic Gardening, Horticulture, Country Journal, Out Here, and American Profile among others. He was Gardens Manager for The Hermitage, home of President Andrew Jackson in Tennessee before returning to Cape Cod to start his newest organic venture, Swan River Farm in Dennisport, MA.
View all posts by lifegrower →
This entry was posted in O to T and tagged garden beds, raised beds. Bookmark the permalink.